Hannah Cox was Ari’s 7x great-grandmother, born in about 1748. She lived in Corfe Castle, Dorset, and died in March 1816. She is buried in the churchyard at St Edward, King & Martyr.

Luckily, a census for Corfe Castle was conducted by William Morton Pitt, and it has been transcribed and made available (see http://www.opcdorset.org/CorfeCastleFiles/CorfeCastleCensus1790.htm). At the time, the population of Corfe Castle was 1239. We can see Hannah after the death of her husband John Stockley. She is listed as:

Other members of the family, living in the High Street, were sons John (21) and George (19), clay-cutters earning 10 shillings, and daughters Hannah (17), Ann (11) and Sarah (7). Hannah and Ann were both knitters earning 4 shillings. Another son, Robert, was 14 and earned 4 shillings as a labourer. The family was on parish pay.

Hannah and John had another son, Shadrach, born in 1771, so the family seems to be connected to the other Shadrach Stockleys in the area but there is more work to do on that.

Sarah was to become Ari’s 6x great-grandmother so she will feature in a post of her own.

Ari, this shows how you are related to Hannah: 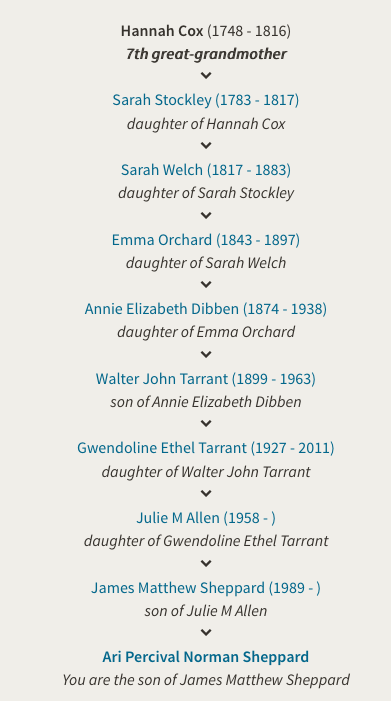