One of Ari’s 6x great-grandmothers was Alice Holmes, who was born in Cromford in 1778, the second daughter of Samuel Holmes and Lydia Roper.

The first record we have for Alice is her baptism at St Mary’s in Wirksworth on 16 September 1778.

Alice married Joseph Wheeldon, a hatter, on 14 September 1801 at the same church.

In 1851 Alice is a widow aged 73, living at Moor Side, Cromford with her son John (Ari’s 5x great-grandfather) and his wife Ruth, and their three young sons.

Alice died on 18 February 1858 and was buried on the 21st at Wirksworth. A notice appeared in the Derbyshire Advertiser and Journal.

Ari, this is how you are related to Alice: 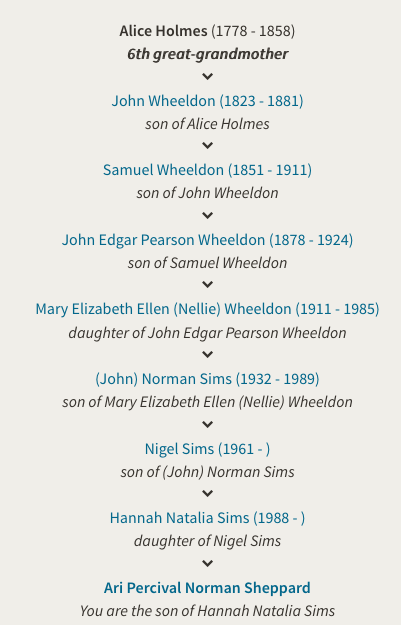 One thought on “Alice Holmes”