One of Ari’s 4x great-grandfathers was Samuel Wheeldon. Samuel was born in Cromford in Derbyshire on 14 July 1851, the fourth son of John Wheeldon (a hatter) and Ruth Brelsford. Samuel’s baptism took place at St Mary’s Church in Cromford.

At the age of nine, Samuel appeared in the 1861 census, and was described as “at home”, unlike his older brother John, who was already working in the cotton factory at the age of twelve. By this time, he had three younger sisters too.

But by 1871 he had joined his father and mother as a merino dresser.

Samuel married Mary Ann Bunting on 7 August 1875 at the Salem Methodist Chapel in Belper. (This building was demolished in 1966. See http://www.belper-research.com/places/salemchapel.html). He is described as 21 years old, and a machinist, living at Holloway.

We can see Samuel and Mary in 1891 with their five children:

Samuel is now a hosiery dresser. Samuel’s father John died from typhoid fever just a few months after the census was taken.

The 1901 census shows Samuel still living at Holloway, and working as a merino hosiery dresser. His daughters Mary (25) and Elizabeth (21) are both yarn winders at the merino mill, daughter Daisy (23) is a yarn mender, and son Lewis (17) is a machinist there.

The 1911 census shows Samuel still at the factory working as a hosiery dresser. His daughter Mary Ann, widowed at the age of twenty-nine, is living with them.

Samuel died on 30 August 1922, at Yewtree View in Holloway. He was seventy-one, still working as a hosiery dresser, and the cause of death was disseminated sclerosis. His daughter Daisy was present. I haven’t found his grave yet, and he didn’t leave a will.

Ari, this is how you are related to Samuel: 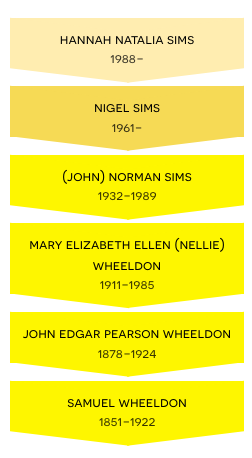