Ari’s 10x great-grandmother Hannah Tomlinson was born in 1664 at Little Eaton in Derbyshire and baptised on Christmas Day at St Alkmund in Duffield.

In 1664, Charles II was on the throne, and this was also the year of bubonic plague. See https://www.eyam-museum.org.uk/

Hannah left no trace of her life until she married on 6 May 1690 in the same church. Her husband was Samuel Eyre.

Hannah and Samuel had at least seven children. The baptism of the first child, William, in 1691, describes Samuel Eyre as “of Hazelwood”. 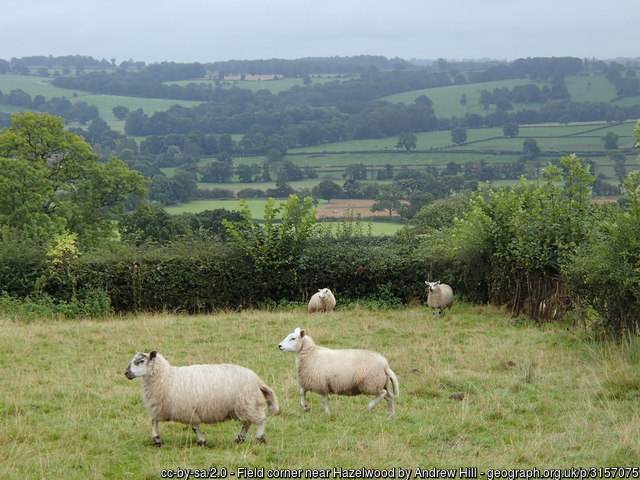 In 1693, Hannah’s father William died, and left a lovely inventory which included a half-headed bedstead, a candlestick, a bacon flitch, two looms, and two cows.

Hannah died in June 1721 and was buried at St Alkmund’s church.

Ari, this is how you are related to Hannah:

Ari has two 11x great-grandmothers whose names I know. One of them was called Judith, and she was born in about 1640, somewhere near Duffield, Derbyshire. (Charles I was on the throne.) 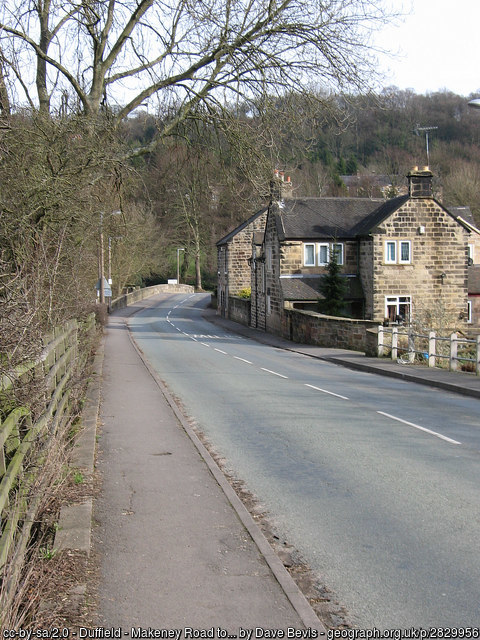 She married William Eyre in about 1660, and they had at least eight children: William, Samuel, George, Mary, Jonathan, Elizabeth, Sarah and Ann.

Judith died in December 1717 and was buried on the 29th of that month at St Alkmund’s in Duffield.

This record describes her as “of Windley”, which is a small village just west of Duffield and Belper.

The record of her burial comes from a collection called “Derbyshire, England, Church of England Baptisms, Marriages and Burials, 1538-1812” on Ancestry.co.uk, filmed by the Latter-Day Saints.

The most useful record we have of Judith’s life is her will, which is on Findmypast, in the collection “Staffordshire, Dioceses of Lichfield and Coventry wills and probate 1521-1860”.

This is easy to read and gives us an amazing amount of detail. She says she lives in Postern, which is a hamlet in the parish of Duffield.

In the will she lists her children:

This gives us the married names of her daughters, and also tells us that she has a granddaughter Judith, daughter of her son Jonathan. (She gets five shillings.) The will was proved in Derby on 28 March 1718.

And then, best of all, we have a beautiful inventory.

This gives us a really detailed picture. We can imagine her house, with a parlour, lower parlour, milkhouse and barn, and space for horses, cows, sheep and pigs. We also now know that she lived at “Postern Park”. This was part of Duffield Frith, which was a Royal Forest.

One day I will find out Judith’s full name!

Ari, this is how you are related to Judith:

One of Ari’s 9x great-grandfathers was Joshua Eyre, born in 1706 in Hazelwood, Derbyshire. He was baptised at the church in Duffield on 25 March 1706, the fifth son of Samuel Eyre and Hannah Tomlinson.

I think they actually lived in Hazelwood, which is a village just north of Duffield. Their marriage record says ‘of Hazelwood’, and this is also recorded on the baptism of one of their sons, and in Joshua’s will. The church in Hazelwood was not built until 1846, so they would have had to walk to Duffield to use the church of St Alkmund.  Joshua’s father Samuel had left him three pieces of land in the liberty of Hazelwood: Calfe Close, Cawver Close and Bradley Close.

Joshua’s wife Elizabeth died some time before 1747, when he married again at the age of forty. His second wife was Ann Frost, described as ‘of Ashbourn, spinster, aged thirty’. Joshua is described in the marriage licence as a husbandman (tenant farmer or small landowner).

They would go on to have seven children.

Joshua died in 1783, and his will is available to read on Findmypast. 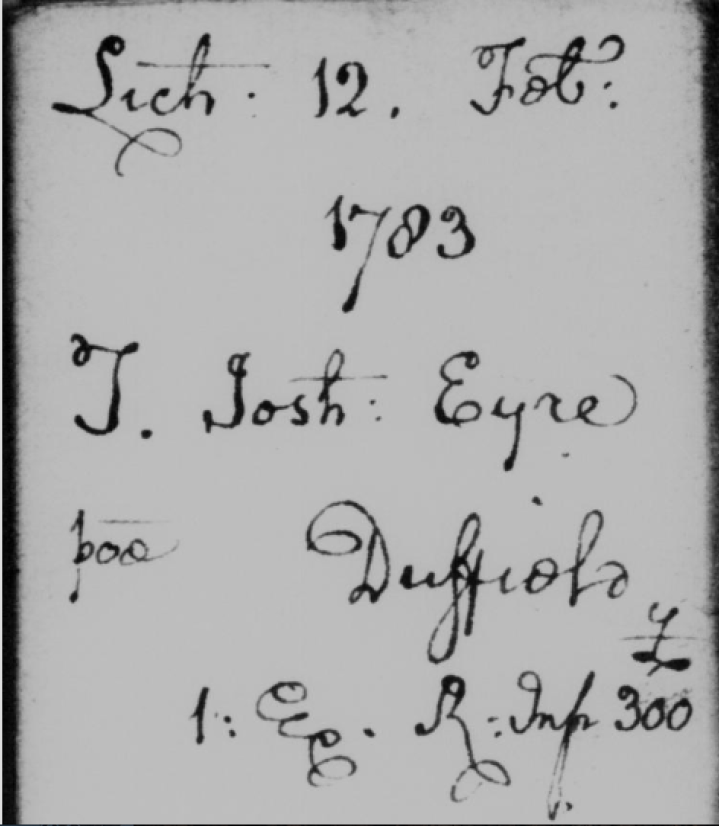 In the will, he lists all of the children of his ‘late son Joshua’ (who predeceased him by three years). He asks that his wife Ann ‘shall keep possession of the said closes or parcels of land for one year after my decease’. He helpfully gives us the names of his married daughters. Although he had signed his marriage licence, here he just puts his mark.

The will was proved on 12 February 1783 at the Court in Lichfield.

Ari, this is how you are related to Joshua:

Recent research has allowed me to find a few ancestors of Ari’s who lived in England in the seventeenth century, some in Dorset and some in Derbyshire.

I thought it might be interesting to look at the historical context, focusing on one of these ancestors, William Tomlinson. William is Ari’s 11x great-grandfather (one of two that I have found so far).

He died on 3 March 1693 in Duffield, Derbyshire, and must have been married in about 1660 (based on the baptism dates of his children), which puts his birth date at about 1640.

Charles I was on the throne at this time, and the English Civil War was just about to unfold. A PhD by Heather Falvey examines Duffield as part of a study of “custom, resistance and politics” in early modern England, and her thesis is available online. The parish of Duffield was part of the duchy of Lancaster, administered by a steward on behalf of the Crown. As well as farming and weaving, men at this time made their living by extracting iron ore, smelting, quarrying stone, mining coal, making charcoal, and making wire. (The occupation of wire-drawing involved turning metal into wire by drawing it through different-sized holes in a template.) Later, nail-making became more important in the area. Sources for this information in Heather’s PhD include the wills and inventories of some of these men. She also mentions a militia list from 1638 held in the National Archives, and of course men paid taxes, so there are hearth tax lists to consult. Heather uses the inventories of Duffield inhabitants to work out how many rooms they had and how wealthy they were, and we can do the same for Ari’s ancestors.

The inhabitants of Duffield had certain rights, and were entitled to use the forests, for example to feed their sheep and cattle, or to provide firewood and wood for making fences. This is what led to riots and resistance when some of the land was enclosed under Charles I. After a period of sabotage and non-compliance, actual rioting broke out in 1642. Evidence for these riots comes from court papers held in the National Archives, with 217 local people being named. They started by pulling down fences and destroying hedges “in a violent & tumultuous way”, and then drove their own cattle onto the king’s land.

This is the world that Ari’s ancestor William Tomlinson was born into, and it might even be possible to discover if his parents were involved. When William died in 1693 his estate was appraised and administered, and the records are part of the Findmypast collection called Staffordshire, Dioceses Of Lichfield and Coventry Wills and Probate 1521–1860. The first page starts in Latin, but then uses English to tell us that William’s surviving wife is called Anne. This page is signed by Anne, Samuel Tomlinson (William’s son), and Samuel Eyre, husband of William’s daughter Hannah.

The next page gives us the inventory:

From this, we know that he left property valued at £21, 16 shillings and 6 pence. The items were:

This suggests that he may have been a weaver by trade. William was buried on 5 March 1693 at St Alkmund’s Church in Duffield. Even though he lived over three hundred years ago, there is still a story to be told and more to discover.

Ari, this is how you are related to William: